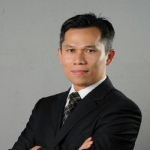 Fawnizu Azmadi Hussin (M’02, SM’14) is an Associate Professor of Electrical & Electronic Engineering at Universiti Teknologi Petronas. He was the Program Manager of Master by coursework program (2009-2013), the Deputy Head of Electrical & Electronic Engineering department (2013-2014) and the Director of Strategic Alliance Office (2014-2018) at UTP. He spent one year as a Visiting Professor at Intel Microelectronics (Malaysia)’s SOC DFx department in 2012-13. He obtained the Bachelor of Electrical Engineering (Computer Design) from the University of Minnesota, Twin Cities, U.S.A. in 1999 and subsequently his M.Eng.Sc. in Systems and Control from the University of New South Wales, Australia in 2001. Dr Fawnizu obtained his PhD in 2008 at the Nara Institute of Science and Technology in Japan under the scholarship from the Japanese Government (Monbukagakusho). He has one patent under his name and another five pending. Dr Fawnizu published more than 100 papers. He is actively involved with the IEEE Malaysia Section as volunteers since 2009. He was the 2013 & 2014 Chair of the IEEE Circuits and Systems Society Malaysia Chapter and currently serving as the Chair of IEEE Malaysia Section (2019 & 2020).