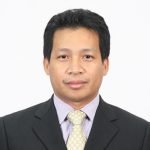 NORDIN RAMLI is an award recipient of Top Research Scientist Malaysia (TRSM) and Young Scientist Network (YSN) by the Academy of Sciences Malaysia, in 2018 and 2014, respectively. He received a B.Eng degree in electrical engineering from Keio University, Japan in 1999. He received the M.Eng and Ph.D. degrees, both in electronic engineering from The University of Electro-Communications, Japan in 2005and 2008, respectively. He has more than 20 years of experience in the telecommunications industry including research and development work. Previously, he was at Telekom Malaysia Berhad as network engineer from 1999-2008, and lecturer at Multimedia University, Malaysia from 2008-2009. Currently, he is a Senior Staff Researcher at the Wireless Innovation Department of Corporate Technology, MIMOS Berhad, Malaysia. He is overseeing the solution development of MIMOS’s in house technology to the government and enterprise sector, especially the IoTs and big data-related projects. On the research